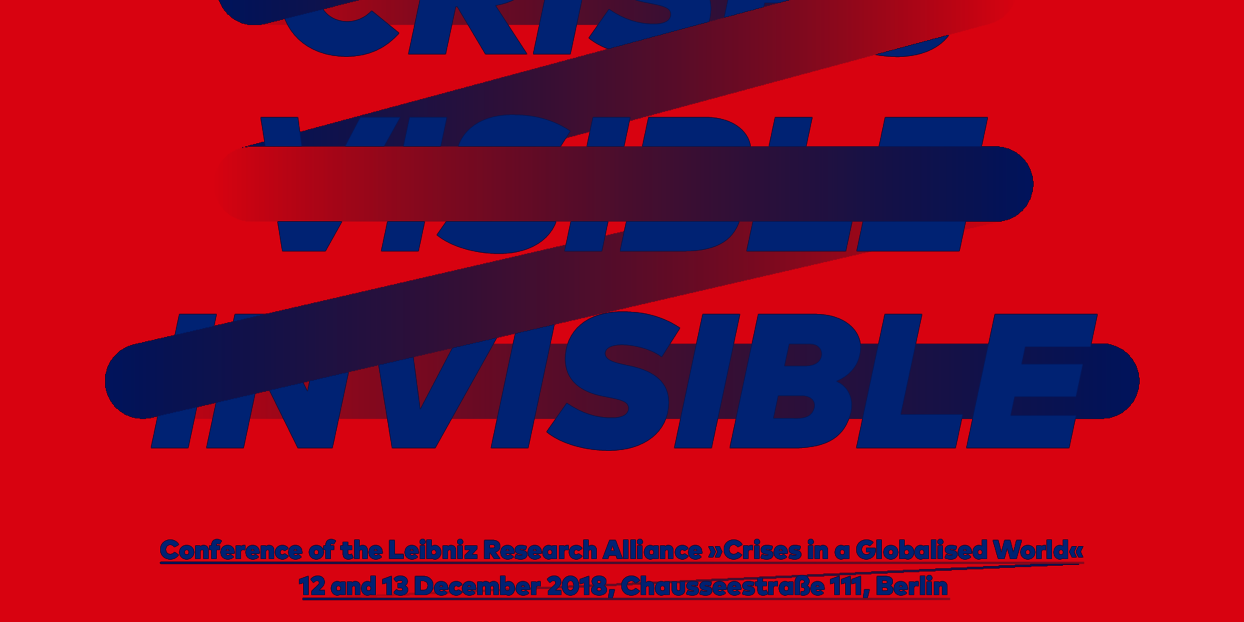 More than 70 academics and the interested public attended the first general conference of the Leibniz Research Alliance “Crises in a Globalised World”, which took place on December 12th and 13th at the headquarters of the Leibniz Association in Berlin.

Under the theme Making Crises Visible/Invisible, the conference showcased the work of the Research Alliance and it´s working groups in five panels, which were spread throughout the two days. The title of the annual conference – Making Crises Visible/Invisible – refers to the question of how to recognize, describe and analyse complex crises phenomena. As crises are always a result of a specific communication and perception in a competitive market of public attention, the mechanisms of their creation or disappearance are a factor of high relevance. The conference was accompanied by an evening reception, which – honoring the theme of the conference – gave a glimpse onto the exhibition-project Making Crises Visible and included a keynote by movie producer Peter Herrmann.

Nicole Deitelhoff, Executive Director of the Leibniz-Peace Research Institute Frankfurt (PRIF) and Speaker of the Research Alliance opened the conference. Deitelhoff stressed the benefits of the Research Alliance and its inter- and transdisciplinary approach, which connects researchers from across 24 Leibniz member institutes. Researchers of these institutes were involved in organizing the five panels, which built the core of the conference.

The first panel, titled “Placeless dynamics? Visualizing the spatiality of crises”, was organized by the Working Group Concepts of Crises and aimed at scrutinizing the strange elusiveness of crises by focusing on the complex and dynamic spatiality of crises. Verena Brinks (Leibniz Institute for Research on Society and Space), Tobias Ide (Georg Eckert Institute for International Textbook Research) and Manuel Aalbers (KU Leuven) participated in the panel, which was chaired by Rüdiger Graf (Center for Contemporary History). Brinks kicked off the panel, highlighting the need to focus not only on the temporal dimension of crises, but also on the spatiality of crises. Brinks pointed out the value of this concept by applying it to the analysis of the EHEC-crisis in Germany. Ide brought in another perspective on spatiality by talking about the spatial and visual representations of water crisis and conflicts in German school textbooks. Ide came to the result that the school textbooks securitize water, reproduce stereotypes about the Global South, and promote an uncritical green economy stance towards the privatization of water. Concluding the panel with a presentation titled “Crisis, Capital and the City”, Aalbers gave an insight into capital switching in the 21st century. Aalbers analyzed different forms of switching and their spatialities and tried to answer the question how capital switches between sectors and places as a response to looming crises in the 21st century.

The second panel, organized by the working group “Economic Crises” and chaired by Friedrich Heinemann (Center for Economic Research / University of Heidelberg), focused on “Dropout from Multilateralism – Economic Consequences and Conclusion” and explored the causes and consequences of the return to a narrow national perspective, which has been seen in the last few years with the rise of populist parties as well as the Trump presidency. Heinemann discussed the topic together with Manuel Funke (Institute for the World Economy) as well as Sonja Zitzelsberger (University of Kassel). Bringing in the case of the European Monetary Union, Heinemann discussed in his presentation the institutional shortcomings of the European Monetary Union and the resulting strategic problems, while also pointing out possible reform options that could make the European Monetary Union more resistant. According to Heinemann, especially the rise of populist parties and governments put the European Monetary Union at risk. Funke took up that thought and looked in his presentation at the economic and political consequences of populists in power. Funke refuted the widespread belief that populist self-destruct themselves in the short term and claimed that however in the long-term, populist governments tend to produce severe crashes. Zitzelsberger analyzed in her presentation another dropout from multilateralism: the announcement of the Trump administration to step out of the Paris Agreement and the significance and consequences of this decision. She embedded the topic into the history of climate negotiations and gave an insight into results from a survey of deeply involved participants in this process and their reflections on the climate negotiations.

The second panel was followed by an evening reception, which was dedicated towards the artistic perspective of crises and the visualization of these processes. Nicole Deitelhoff and Klaus Hesse (University of Art and Design Offenbach am Main) presented a preview of the art-project Making Crisis Visible, which provides an experimental approach to visualizing the projects of the Research Alliance. In cooperation with students of the University of Art and Design Offenbach (HfG) and the project partners of the Research Alliance, hybrid “Science-Art-Objects”, clips and posters were designed that can be seen as a creative processing of scientific findings, which speak to the audience in an emotional and unexpected manner.

The reception continued lateron with welcoming words by Matthias Kleiner, President of the Leibniz Association, followed by a keynote by the movie producer Peter Herrmann, who´s best known for producing the Academy Award winning movie “Nowhere in Africa”. Herrmann spoke about the crises that his movies display, but also about the crises of movie making and the challenges that an independent movie producer faces.

The second conference day began with a panel organized by the Working Group Socio-Political Crises. Antonia Witt (Peace Research Institute Frankfurt) chaired the panel which was titled “Permanent crises of political institution between visibility and invisibility”. Witt brought up the argument that political institutions are in a permanent state of crisis and it is only the visibility of the crisis that varies. She initiated the discussion, which was led by Nicole Deitelhoff, Frank Bösch (Center for Contemporary History) and Andrew Hurrell (University of Oxford). Deitelhoff started the discussion by taking a look at the International Criminal Court, the RtoP and the contestation that both innovations experienced since their emergence. Deitelhoff tested the widespread notion that these two norms are in crisis and stated that much of this contestation results from unresolved tensions in the normative architecture of the UN-system. Bösch turned the attention of the audience towards the Iranian revolution and analysed how global media communication created such a powerful crisis. He showed how international journalism supported indirectly the rise of Chomeini’s position during his French exile in 1978/79, and how his return to Teheran was transformed into a “live broadcasting of history”. Also referring to the crises of the 1970s, Hurrell reflected in his presentation on the notion of the crisis of global and international order and pointed the audience towards the mechanisms of resolving crisis in the 1970s in order to make sense of the current state. Hurrell unpacked the idea of permanent crisis and created links between previous crises and the current situation.

The fourth panel, organized by the Working Group Environmental Crises and chaired by Andreas Macke (Leibniz Institute for Tropospheric Research), was dealing with “Environmental crisis in the eye of different beholders: From seeing and understanding”. Jochen Schanze (Leibniz Institute of Ecological Urban and Regional Development), Simonas Kecorius (Leibniz Institute for Tropospheric Research) and Jale Tosun (University of Heidelberg) highlighted different ecological crises and approaches. Schanze introduced in his presentation a new conceptualization of environmental crises, which is characterized by its multidisciplinary approach. Kecorius reported about the on-going work on mitigating emissions of black carbon in Metro Manila in the Philippines, focusing on the transdisciplinary approach of bringing together researchers from different areas with stakeholders. Tosun concluded the panel by talking about the mobilization potential of NGOs in the context of water pollution as an emerging crisis. Overall, the panel highlighted the need for an integrated approach to environmental crisis research, including natural, spatial and social sciences.

The final panel of the conference was themed “Food insecurity, food price developments, and social protests”. Organized by the Working Group Humanitarian Crises and chaired by Stefan Kroll (Peace Research Institute Frankfurt), the panel dealt with the visibility and invisibility of the humanitarian crisis of food insecurity. Kroll discussed the topic together with Osama Ahmed (Leibniz Institute of Agricultural Development in Transition Economies) and Charles Martin-Shields (German Development Institute). Zooming in on the issue of food insecurity and agricultural and food price developments, Osama evaluated policy changes by the Egyptian government from the perspective of agricultural economics by using the example of price developments along the wheat-to-bread supply chain. Martin-Shields presented in his talk that researchers have found that causal and substantive links exist between food security and violent conflict, spanning the individual up to global levels. He focused in his talk on the challenge of bringing these long-term impacts of food insecurity into the wider public policy debate and showed techniques that are used to disentangle complex food security issues during crises.

Altogether, the contributions to this conference reflected on the complex relationship of subjective and objective understandings of the concept of crisis. Although it would be expected that the term crisis would imply immediate visibility, crises are made visible or transfigured by social actors. The individual panel events, at which researchers form the alliance as well as external experts gave presentations, contributed to the dissemination of our activities. Based on this motivating and inspiring experience, we are already looking forward to the next conference scheduled for spring 2020.